Vida Rochelle Blue Jr. (born July 28, 1949) is a former American professional baseball player.[1] He was a left-handed pitcher in Major League Baseball between 1969 and 1986, most notably as an integral member of the Oakland Athletics dynasty that won three consecutive World Series championships between 1972 and 1974.[1] He won the American League Cy Young Award and Most Valuable Player Award in 1971.[2]

Vida Blue was born and raised in Mansfield in DeSoto Parish in northwestern Louisiana. He was the oldest of six children born to Vida Blue, Sr, a laborer in a Mansfield iron foundry, and his wife, Sallie. In high school, Blue pitched for the baseball team and quarterbacked the football team. In his senior year of football, he threw for 3,400 yards and completed 35 touchdown passes while rushing for 1,600 yards. In his senior year of baseball, Blue threw a no-hitter and also had a 21 strikeout game, in just seven innings pitched.[3] He received several offers to play college football, but after his father died suddenly, Blue signed a contract with the Oakland A's.[4]

Blue was a power pitcher who worked fast and pounded the strike zone. He threw an occasional curveball to keep hitters off balance and an above average change-up, but his signature pitch was a fastball that threw consistently at 94 miles per hour (151 km/h).[5] According to Quinn Roberts of MLB.com, Blue possessed "a blistering fastball that could dial up to 100 mph."[6] In The Neyer/James Guide to Pitchers, all-time hits leader Pete Rose stated that Blue "threw as hard as anyone" he ever faced,[7] and baseball historian Bill James cited Blue as the hardest-throwing lefty, and the second-hardest thrower of his era, behind only Nolan Ryan.[8] 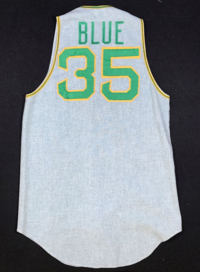 In 1970, after spending the season in the minor leagues with the Midwest League single A Burlington Bees (Iowa) and the Iowa Oaks of the American Association, Blue was called up in September, making two starts that provided a glimpse of what was to come. On September 11, he shut out the Kansas City Royals 3–0, giving up only one hit, to Pat Kelly in the eighth inning. Ten days later, Blue no-hit the defending and eventual repeat American League West champion Minnesota Twins, 6–0, at Oakland–Alameda County Coliseum, the lone baserunner coming on Harmon Killebrew's fourth-inning walk.[9][10]

Blue had a 24–8 record in 1971, winning both the Cy Young and MVP awards. He was the first Athletic to win the latter award since another pitcher, Bobby Shantz, in 1952 with what were then the Philadelphia Athletics.[11][12][13][14] He also led the American League in complete games (24), shutouts (8) and earned run average (1.82).[15] That season, the Athletics won the American League West title for the franchise's first postseason berth since the Philadelphia Athletics in the 1931 World Series. He got off to a terrific start, going 10-1 when he linked up with Boston's Sonny Siebert, who was 8–0, in a dramatic May matchup in Boston. The game was won by Siebert and the Red Sox 4–3, and remains what is considered one of the most dramatic games in Fenway Park history. He was the youngest American League player to win the MVP Award in the 20th century.[16] He was the starting pitcher for the American League in the 1971 All-Star Game, and for the National League in the 1978 All-Star Game. In 1971 he became the only player ever to be a starting pitcher in the league opener (against the Washington Senators), the All-Star Game and the playoff opener (against the Baltimore Orioles) in the same season.

In 1971, he was on the covers of Sports Illustrated and Time magazine.[17] In 1972, his success in baseball led Blue to a small role in the film Black Gunn, starring Jim Brown.

After Blue's breakthrough season in 1971, he and Athletics owner Charlie Finley clashed over his salary. Blue held out, missing much of the year, and ended up with a 6–10 record. He did not make the Athletics' post-season starting rotation, instead pitching mainly in relief. Against the Cincinnati Reds in the 1972 World Series he made four appearances, including a save in Game 1, a blown save in Game 4, and a loss in a spot-start in Game 6.

Vida Blue pitches for the Oakland A's in 1973

Blue returned to form to win 20 games in 1973, 17 games in 1974, and 22 games in 1975, as an integral member of the Oakland Athletics' five straight American League Western Division pennants from 1971 to 1975, and three consecutive World Championships in 1972, 1973, and 1974. Perhaps his finest postseason performances were four innings of shutout relief work against the Detroit Tigers to save Game 5 of the 1972 American League Championship Series and a complete-game 1–0 shutout against the Orioles in Game 3 of the 1974 ALCS.

On September 28, 1975, Blue, Glenn Abbott, Paul Lindblad and Rollie Fingers combined to no-hit the California Angels 5–0. That no-hitter is, as of 2014, one of only four to be pitched on the final day of a regular season, the others being Mike Witt's perfect game in 1984, Henderson Álvarez's no-hitter in 2013, and Jordan Zimmermann's no-hitter on September 28, 2014. Blue also became the first no-hit pitcher to also pitch in a combined no-hitter; others include: Chicago White Sox hurlers John 'Blue Moon' Odom and Francisco Barrios; the California Angels' Mark Langston and Mike Witt; the Atlanta Braves' Kent Mercker, Mark Wohlers, and Alejandro Peña; and Kevin Millwood and Cole Hamels of the Philadelphia Phillies.

Blue endured a rocky relationship with Athletics owner Charlie Finley. After the 1976 season, he told reporters, "I hope the next breath Charlie Finley takes is his last. I hope he falls flat on his face and dies of polio."[18] In June of 1976, baseball commissioner Bowie Kuhn vetoed an attempt by Finley to sell Blue's contract to the New York Yankees, and did the same thing on January 30, 1978 to a trade announced by the Reds at the Winter Meetings on December 9, 1977, that would've had Blue sent to Cincinnati for Dave Revering and $1.75 million.[19][20] In both instances, Kuhn said the trades would be bad for baseball because they would benefit already powerful teams without making them give up any significant talent in return. At the end of the 1976 season, nearly the entire A's roster of star players from Oakland's championship teams left with baseball's new free agency, or were traded off by Finley, leaving Blue, who was still under contract with Oakland, to mentor a new team of primarily rookies and other young players. Alvin Dark, who managed Blue in 1974 and 1975, was surprised that Blue had remained with the team, writing that he "must have gotten the contract concessions he wanted."[21] In a deal that Kuhn did not veto, Blue was finally traded to the San Francisco Giants for Gary Thomasson, Gary Alexander, Dave Heaverlo, John Henry Johnson, Phil Huffman, Alan Wirth and $300,000 on March 15, 1978.[22] Mario Guerrero was sent to the Athletics just over three weeks later on April 7 to complete the transaction.

In 1978, Blue won 18 games as he led the Giants to 89 wins and a third-place finish in the National League West Division, which was won by the Los Angeles Dodgers. His great year was rewarded as he won the Sporting News National League Pitcher of the Year. He, along with Chili Davis, were the last players before Ichiro Suzuki to wear their given name on the back of their uniforms instead of their surname, both having done so with the Giants.

Blue battled drug addiction over the course of his career. After the 1983 season, he and former teammates Willie Wilson, Jerry Martin and Willie Aikens pleaded guilty to attempting to purchase cocaine. In 1985, Blue testified in the Pittsburgh drug trials. Blue's troubles with substance abuse continued to haunt him after his playing career, as he faced multiple DUI charges in 2005. He acknowledged that the trials may have influenced him being left off the Hall of Fame ballot after one year, stating, "I had some issues in my life that might have had a tendency to sway voting. There are some guys in the Hall of Fame who don’t have halos."[23][24]

After baseball, Blue made a name and career for himself in the San Francisco Bay Area by donating his time to many charitable causes, mostly promoting baseball in the inner city. Blue currently[when?] lives in San Francisco and is active in promoting the sport of baseball.

He is currently a baseball analyst for NBC Sports Bay Area, the TV home of the San Francisco Giants.

Blue has also been active promoting baseball in Costa Rica.[29]

As a guest announcer on the WEEI Red Sox radio broadcast Memorial Day, May 27, 2019, versus the Cleveland Indians, Chris Berman stumped the booth, asking what he described as his favorite baseball trivia question, “Who is the last switch hitter to win the AL MVP?” The answer: Vida Blue. Given adoption of the DH rule in the American League with the 1973 season, Vida Blue is likely the last pitcher to accomplish this feat.

In 1998 the pop punk band All released the song "Vida Blue" on its album "Mass Nerder" with the chorus referencing Blue: "I’m ready now, let's go, Burn my world a southpaw curve, Fast and hard - like Vida Blue."

In 2001 an electronic band featuring members of Phish, The Allman Brothers Band, and the Meters named themselves Vida Blue. Originally a hardcore band from Iowa City, Iowa had been using the same name through part of 2001. The band subsequently changed their name to Ten Grand after they sold the rights to the band name to Page McConnell for $10,000. Blue himself joined the band on stage in 2004 at The Fillmore in San Francisco.